This emblem signifies Peace Through Culture 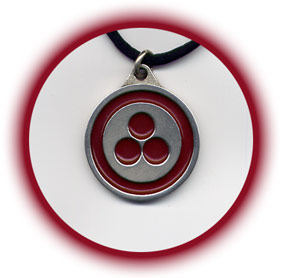 The Banner of Peace is a powerful universal symbol which was adapted by the visionary artist Nicholas Roerich to serve as an emblem for the desire of human culture to rise above war. The Banner of Peace flag has been flown globally, as a sign of peace and culture, since the 1930's.

The Banner of Peace is a deep red color to symbolize the color of our one human blood. The top circle represents spirituality and encompasses the truth of all religions, that we can all unite regardless of our distinct beliefs. The two circles on the bottom represent art and science. The circle that surrounds the three spheres represents culture - the unity of art, science, and spirituality.

The Banner of Peace was originally flown above cultural institutions to protect them from being bombed during times of war. In 1993, Jose Arguelles adopted this symbol as an official emblem of The Planet Art Network, urging it be displayed at all events, gatherings, and centers which promote Galactic Time and Planetary Peace. Arguelles declared we must now promote this symbol everywhere - because we must protect the Biosphere - the Mother of All Culture.

The symbol for the Banner of Peace can be found in many cultures and numerous philosophical systems. It can be found on the coat of arms of the Popes, on Ethiopian and Coptic antiquities, and stone age amulets. It also appears on Tibetan rings, Buddhist banners, the Temple of Heaven in Peking and in the oldest of Indian symbols, the Chintamani, the sign of happiness. Already a part of many cultures, the Banner of Peace is the perfect symbol to bring all peoples together in peace.

After witnessing the devastation of the first World War, Roerich created the Roerich Peace Pact as an international treaty to protect cultural institutions from the ravages of combat. His Peace Pact called for the Banner of Peace to be flown to protect all schools, churches, museums, libraries, etc during times of war.

Written with the assistance of international experts and lawyers, the Peace Pact was praised by many notable figures during its signing including Albert Einstein, George Bernard Shaw, and H.G. Wells. The Pact states, "educational, artistic, and scientific institutions... shall be protected and respected by the belligerents ... without any discrimination as to the state allegiance of any particular institution or mission... these missions may display a distinctive flag (the Banner of Peace)... which will entitle them to special protection and respect..." Thus any site of cultural activity around the world can fly the Banner of Peace to declare itself neutral, independent of combatant forces, and protected by international treaty.

Thank You for Activating this Sacred Symbol of Planetary Peace! 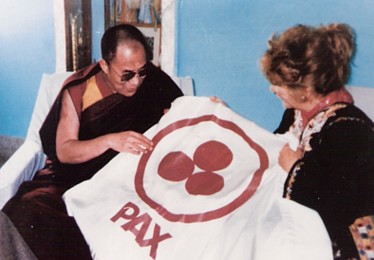